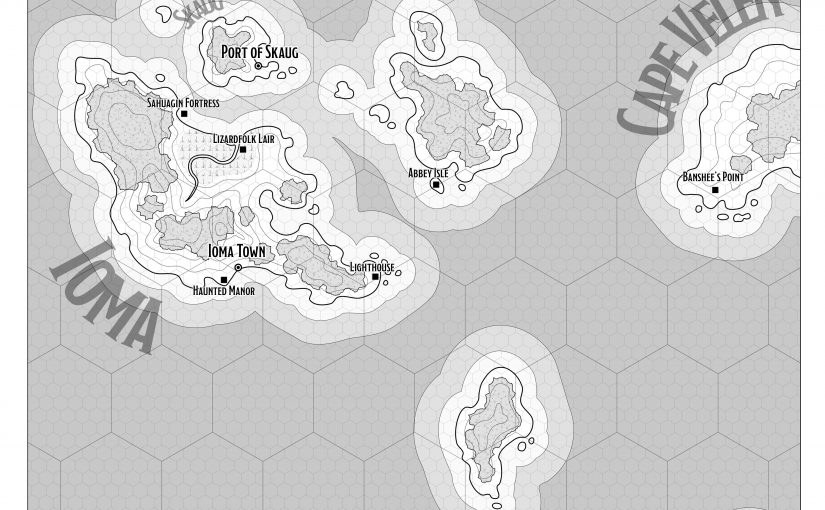 So after toying around with the idea of running the Ghosts of Saltmarsh adventure in the Amnian fishing town of Kalathtyr, I got distracted and became interested in the Nelanther Isles to the west instead as a more suitable location. The isles were one of the Forgotten Realms’ lesser developed pirate settings, but saw a little post-spellplague development in the 4e era campaign setting and in the Living Forgotten Realms adventure, Sovereign of the Mines.

Ioma Town itself was a new addition to the isles as of 4e, a mining town tightly controlled by the Cowled Wizards of Amn. Like Saltmarsh, Ioma Town has potential factions built in (the Cowled Wizards and the merchant consortium that owns the mines) and a few others that could be used (the underground wizards of the Emerald Cabal, who oppose the state-authorized Cowled Wizards; the Shadow Thieves, an organized crime consortium operating out of Amn; and any number of squabbling Nelanther pirates that infest the nearby isles). It’s smaller than Saltmarsh – about 800 residents – but it has a few canon locations, including the basalt tower owned by the Cowled Wizards, and two named taverns, the Brass Lantern and the Vorpal Pickaxe.

There are two maps below, one with only the “canon” locations included and another with suggested locations for the Ghosts of Saltmarsh adventures. Again, feel free to use these in your home campaigns. 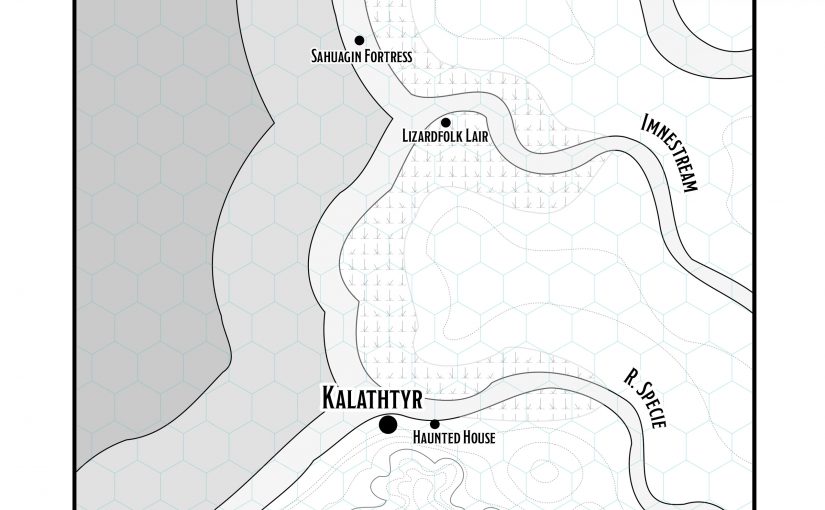 Revamping this blog to share some of my semi-finished, mostly-abandoned RPG content in the hope that someone else may find it useful. When Ghosts of Saltmarsh came out, I started kicking around suitable places to run the adventures in the Forgotten Realms that were slightly less crowded with existing lore. I also wanted to tool around with creating maps inspired by Dyson Logos’ overland map of the Saltmarsh region.

My first thought was the small fishing village of Kalathtyr in Amn. Pretty much all of the written lore for Kalathtyr occupies less than one page of Volo’s Guide to Baldur’s Gate II , and the Zehoarast Flood Plain in which it lies is sparsely detailed once you get any distance from the major cities and trade roads. There’s plenty of swampy land for lizardfolk, coastline for sahuagin, and a couple islands for the “Isle of the Abbey” adventure.

The maps below are roughly the same size as the Saltmarsh region map. The village of Kalathtyr itself, however, is much smaller than Saltmarsh: Canonically, at least in the pre-4e era, Kalathtyr was home to only a couple dozen families. No inn, but visitors could stay on the flat roof over the kitchen of the village’s only tavern (if they could tolerate the insects that bred in the settlement’s ubiquitous mud).

Here are two versions, a version with only the canonical locations labeled and a second with possible locations for the adventure sites from Ghosts of Saltmarsh. Feel free to download and adapt either for your personal campaigns.